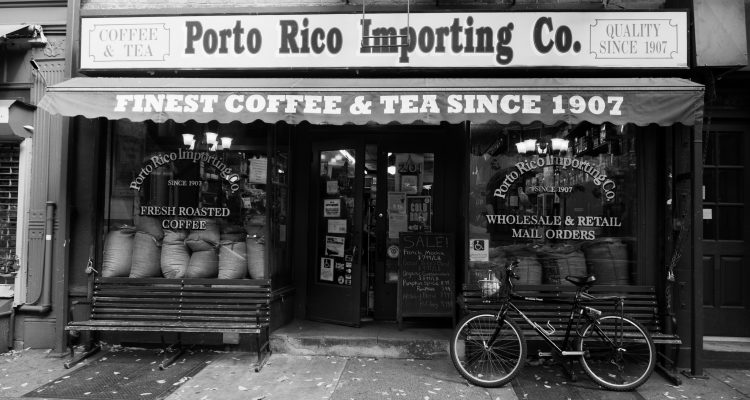 Today was a Sunday and for the first time in probably 5 years I guiltlessly did nothing to advance any business initiative of mine. I worked on no personal projects. I did no client work. I walked down to Bleecker Street maybe 10 blocks south of my apartment and I went to Porto Rico, a hundred year old coffee importer I’ve been going to for a decade that has a little coffee bar in the back. I got a coffee, sat on a bench out front, drank my coffee and watched the streets.

Some youngish guy, maybe a few years older than myself, walked up with a little black dog – part dachsund, part chihuaha, part terrier it would turn out. I grew up with dogs and love them. I pet the dog and offered to watch it while the guy went in for a coffee.

The guy came out with his coffee, and I asked him about the dog – her name, how old, was it a girlfriend’s or his, where they live? It turns out he lives right across the street from an apartment I had sublet one summer down Bleecker a few blocks. We ended up sitting there talking for an hour at least. We’ve both been in the neighborhood maybe half a decade, both face many of the same doubts and challenges in our lives in the city, the same fears, struggles and hopes in love. Anybody who might have walked by would have thought us lifelong friends.

An afternoon like this – sitting out on a bench on the street, reflecting, making friends with strangers from the neighborhood – is something that for tragically long in my life I would have considered wasting time. I think that with age I am recognizing it to be entirely the opposite. The reward you reap from time that you invest in work is not linear. For the most gratifying sort of work – stumbling on a novel opportunity and building a company with friends, for instance – the governing law is a power law. A couple of years invested in the right opportunity may well earn you far greater renumeration than a lifetime of more typical work, no matter how hard you grind at it.

Taking time to reflect, to get to know people and myself, to be detached from the noise of the web is for me a part of opening up to these greater opportunities. These days I would rather cultivate energy by taking a day off like this to enjoy the city and its people than pour energy into speculative projects that don’t have the ambition or hope of being the big win.