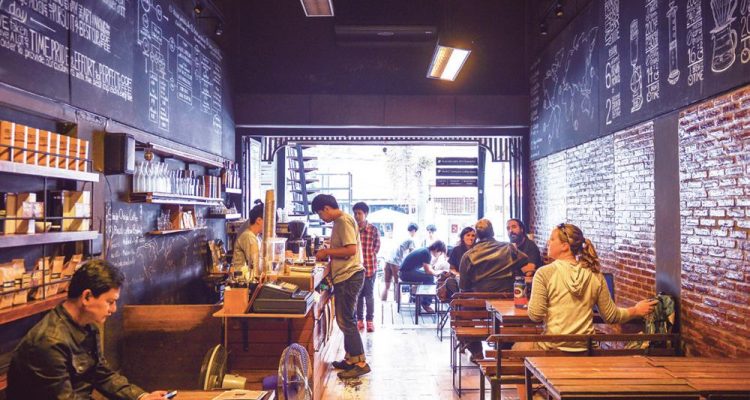 Ristr8o Cafe, Nimman. A popular cafe in my neighborhood and one that nicely represents the vibe in Chiang Mai. Photo credit: BK Magazine

I have been in Chiang Mai, Thailand since past Saturday with Hacker Paradise, a roving group of creatives and remote workers. I joined Hacker Paradise on the recommendation of a friend, who had been on a prior trip. It is my first time in Asia, and so far there has been a tremendous amount to take in.

I have been in Chiang Mai just 4 full days right now, and will certainly be sharing a more mature perspective on the city as my month here progresses. So far there has been both a lot that squarely aligns with preconceptions I’d had of the city, and also quite a lot that has been a surprise. 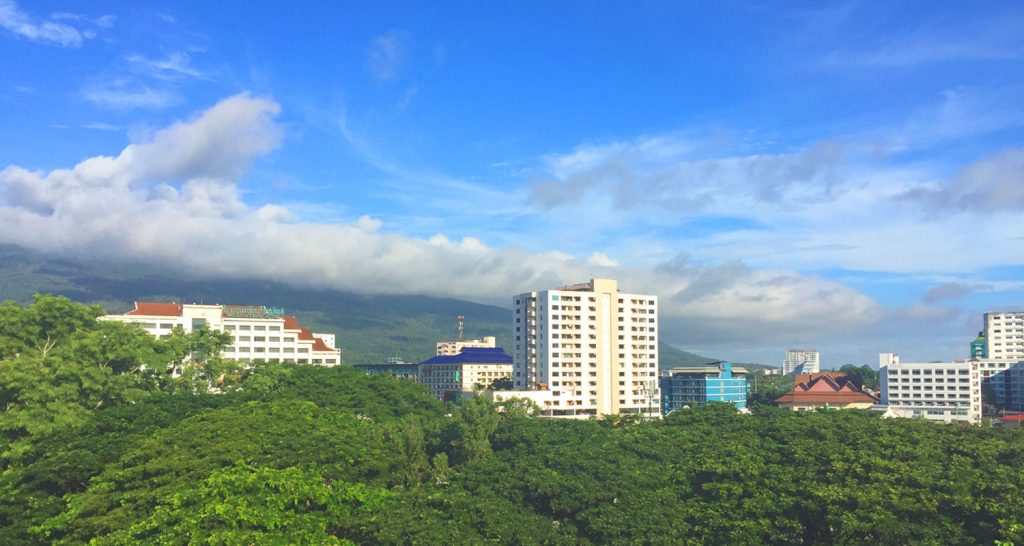 Chiang Mai as seen from my apartment balcony

For those who know nothing of Chiang Mai, the Northern Thai city has become, over the last few years, something of a mecca for the “digital nomad” community. That is not to discount its rich history and culture, but its reputation among remote workers is, for better or worse, a large part of what brought me here. Countless westerners have written of the city as an ideal place to cultivate one’s creative or business ambitions. Chiang Mai has an intersection of cost of living, quality of life, community and infrastructure that can give you a lot of space and focus for your work.

The present conversion rate for the local currency (Thai Baht) is around 33 to 1. A typical dinner entree might cost you around 65 THB or ~$2 US. Serviced apartments (i.e. furnished and including cleaning and basic amenities) can be had for around $300-$400 US, and even very high-end condos seem to cost no more than $650 US.

I’d be remiss if I didn’t mention massages, even though I’ve embarrassingly yet to go out for my first – these can be had for around $6 US, my friends tell me.

Overall it seems one can live a comfortable lifestyle here for around $1,000 US a month without even trying particularly hard to save money, and my impression is a downright luxe lifestyle can be had here for less than $2,000 US a month. 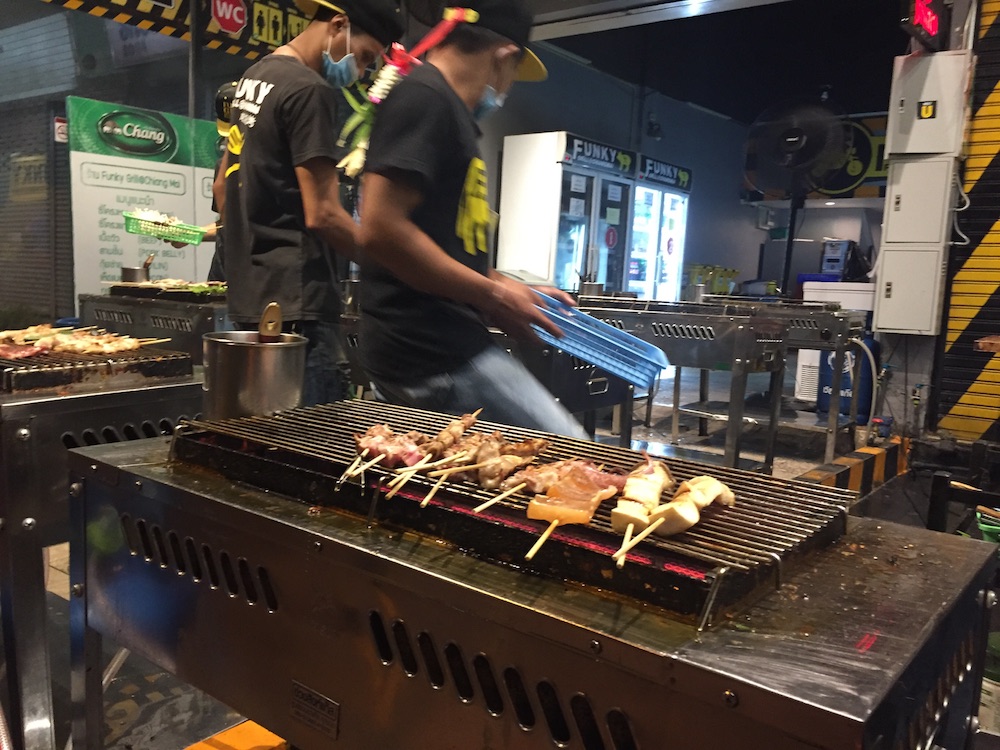 Great skewer place down the block from my apartment. 10THB or ~$0.30 USD for a chicken skewer!

For the infrastructure most critical to online work – quality internet and quiet, comfortable spaces – Chiang Mai is incredible. There’s several modern, well-equipped coworking spaces in the city. I’ve been working primarily out of CAMP in the Maya Mall, since this is the official space that Hacker Paradise reserved for the group, and a primary place where we congregate for meetings and to go out. Punspace is also very popular, and has two locations (one in trendy Nimmanhaemin – the same neighborhood as CAMP – and one in the Old City). 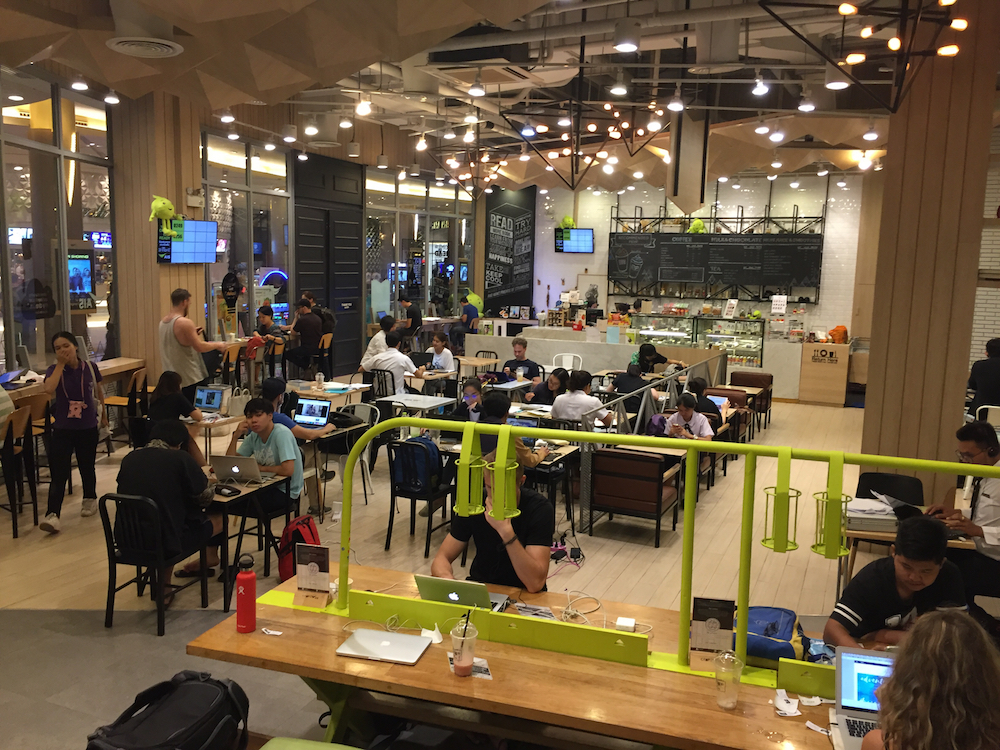 There are also hundreds of excellent cafes throughout the city to work out of. In the 4 days I’ve been here I’ve already managed to find 3 excellent cafes in immediate vicinity of my apartment.

I should also acknowledge that there is a side of the infrastructure in Chiang Mai that I’d say is not so good. I’d had a notion of the city being a sort of tranquil, zen space with pure mountain air and fresh running streams. This is certainly not the case. Loud scooters with two-stroke engines and diesel pickups abound on the main roads, and the air quality is palpably poor by western standards. I walk every morning along Huaykaew Road to get to the coworking space and the walk is one marked by noise, dust and engine fumes. There also aren’t many crosswalks in the city – most of the time you make it to the other side of the road by finding a window of opportunity and darting across.

There is also an abundance of construction (little surprise given the city’s growing profile and appeal among westerners) and so you’ll encounter a lot of construction noise and find yourself walking around sidewalk barricades as you spend time in the city.

I should definitely qualify these observations by acknowledging that this is my first experience in Asia, and that these less desirable aspects of the environment in Chiang Mai would probably also be found in many/most other  developing Asian cities.

I had a lot of anxiety about getting by in an environment where the primary language is so foreign. This anxiety turns out to have been poorly founded, as nearly everybody in Chiang Mai seems to have enough English to communicate most critical things (additionally, most menus, signs, etc have English translations).

I’ve been delighted to discover how warm and friendly people are here. I had an instinctive shyness my first 24 hours because I’ve never been in an environment this foreign, but it’s become clear already that if you are respectful, confident and kind to people here they reciprocate, even despite the language barrier.

I actually haven’t dug much into the notable elements of famous, ancient culture here yet. I would say that this is shameful, except the fact that I’ve only been here four days and have a month still to go. Friends of mine went up to Doi Suthep (an ancient temple in the hills) this morning, which is something I intend to do before leaving. There are also many famous temples and relics to be found in the Old City.

What are you working on?

For the last 3 years I’ve been working with a company in New York and Berlin, first on contract (about 2 years) and then as a full time employee in a senior developer and team lead role (~1 year). I resigned from this job about ~1.5 months ago but only wrapped up last week.

I left the job with a clear vision for a new company – a sort of globally distributed product studio and consultancy. My work on this is just now beginning, and I am appreciating the space and focus I’m able to achieve in Chiang Mai. More specific details about the company and its initiatives will be shared here as work progresses. 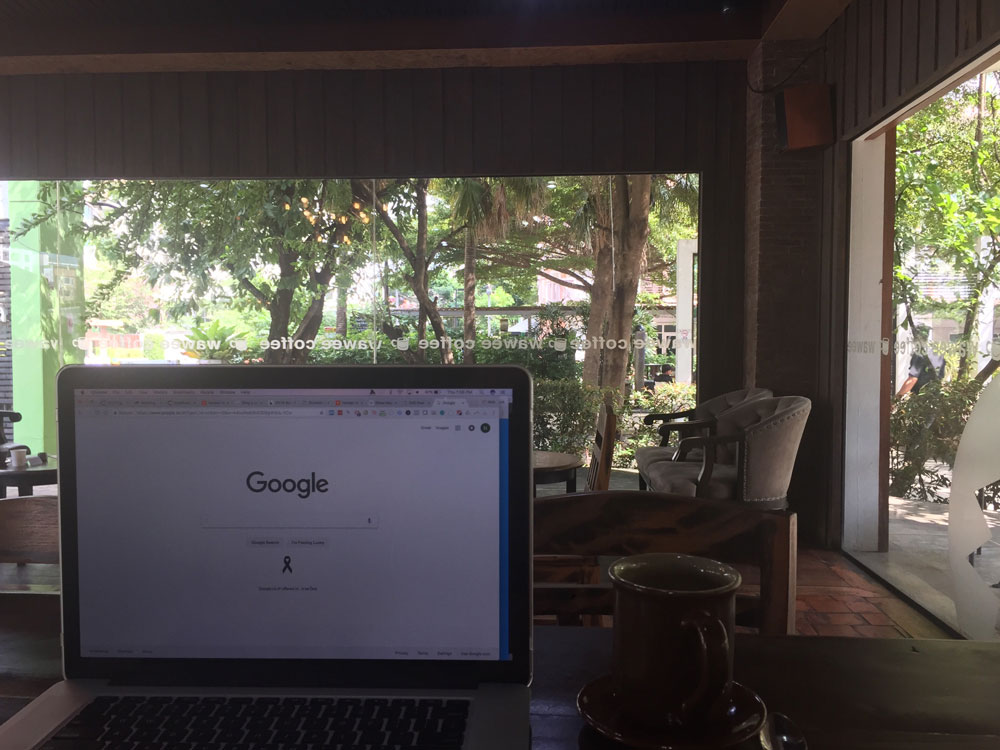 Wawee Coffee – one of a number of tranquil, convenient cafes I’ve been working from

I have whined a lot about pollution and certain other negative aspects of life in Chiang Mai in this post, but overwhelmingly I am loving the city. Chiang Mai offers a fantastic work setting and a great broader quality of living, all for a very low cost. For that reason I believe that the singular reputation it’s acquired among remote workers and entrepreneurs is well-justified.